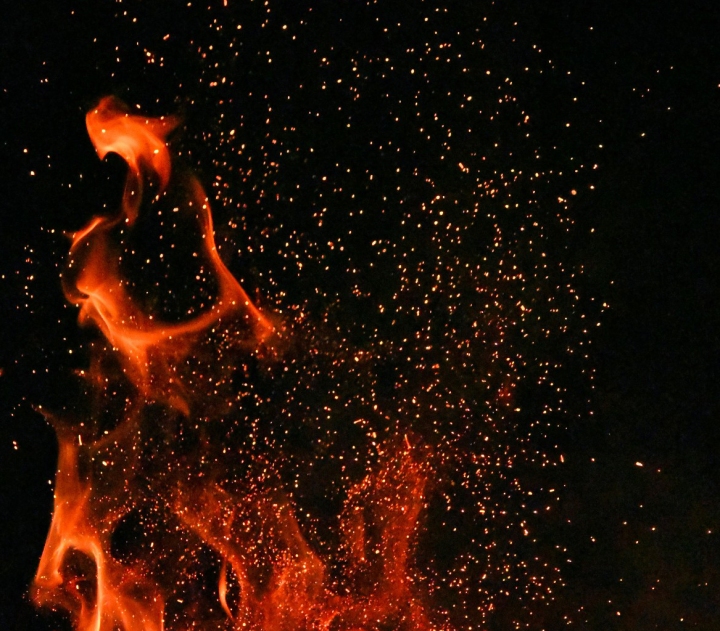 The mountains were burning in Southern California, as they do, ash falling on the hood of his Range Rover as he backed me into the door, his knee between my thighs, the music from the club muted. I’ll take you where you can see stars, he mumbled into my throat. His hair smelled of cigarettes and coconut. My car followed his red taillights west toward the Pacific. When I was a child, I played a game as my father returned me to my mother’s: there were devils in the taillights we followed, angels in the headlights coming toward us. Now, I snaked up switchbacks without guardrails, the road a thin thread between steep rock walls and dark pits. Orange limned the hills. The newscaster on KNX said that the fire was only 5% contained. His house stood alone on a hill, interconnecting glass boxes like those 3D puzzles I could never put together, with an almost-360-degree view of the Valley, Malibu, and the ocean. A thriller had been filmed here once, but I couldn’t remember the name. Smoke from the fire billowed above. As he swung open the door, he said, I’m in the voluntary evacuation zone. He swiveled a telescope in his bedroom to face east. No stars were visible. Viggo Mortenson lives there, he said. And Jason Momoa there. I squinted through the eyepiece at the twinkling lights from the stars’ houses. Ashes rained against the glass. He pressed against me, his tongue on my neck, his hands pulling up my skirt. Palms wide on the window, rocking against each other. Sometimes you feel empty and want the hollowness to be filled, even with more emptiness. Jason Momoa’s lights turned off. Helicopters strafed the sky. Afterwards, in his kitchen, he fed me cling peaches and I licked juice from his fingers. On one far wall, next to the Wolf stove, chunks of stones and other objects filled a small bookshelf. My fingers hovered over an empty bottle on the first shelf (labelled “O”), a Claddagh ring (“Ag”), a red pottery shard (“U”), a watchface with green gleaming numbers (“Ra”), a chunk of rock (“Po”). My periodic table, he said. Is this all the elements? I asked. No, some of the half-lives are too short, he said. A spotlight haloed the shelf; the objects glowed. I wanted to ingest them, to rub them on my skin. He stayed my hand. We fell asleep on the living room rug and woke only when smoke thickened the air and the walls reflected orange as if the drywall were made of fire. Firefighters pounded at the door. The flames moved toward us with the roar of a freight train. One firefighter in a respirator mask wrapped us in Mylar blankets, while the rest hung back, leaning against the side of their truck. It’s a goner, the firefighter said. Windows burst and steel twisted. I was beginning to think the puzzle could be solved. As the fire reached the kitchen, the flames turned apple green, blue, peach. Are you running a meth lab? the firefighters asked. I didn’t tell them it was all the matter in the universe.

Lori Sambol Brody lives in the mountains of Southern California.  Her short fiction has been published in Smokelong Quarterly, Tin House Flash Fridays, New Orleans Review, The Rumpus, and elsewhere.  Her stories have been chosen for the Wigleaf 50 and the Best Small Fictions 2018 and 2019 anthologies.  She can be found on Twitter at @LoriSambolBrody and her website is lorisambolbrody.wordpress.com.