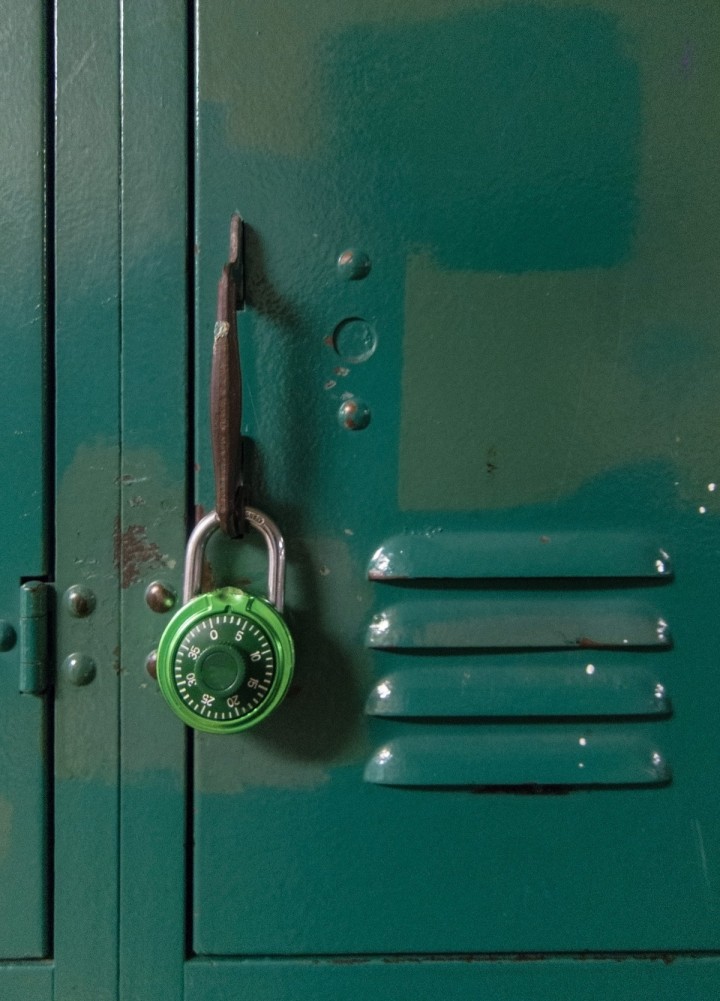 We spent all of homeroom scouring the yearbook for pictures of mooners and Mary-Ann Shoemaker.

It was the last day of classes, one of those do-nothing days when all anyone wanted was to reminisce about senior pranks and under-chaperoned ski lodge trips and Mary-Ann Shoemaker stories.

Kayla asked if we remembered when Mary-Ann Shoemaker pierced her lip in the YMCA change room.

We did. Mary-Ann Shoemaker had leaned close enough to the mirror to fog it up, staring at herself through the mist, sticking a safety pin through her pouting bottom lip. It bled too much, all over her bitten-nail hands. She wiped the blood onto the speckled concrete walls, like a cave painter. She left for the swimming pool to do the butterfly-stroke in a Las Vegas t-shirt and boys’ swim shorts, leaving behind a trail of dripping blood. One drop fell into a puddle of chlorinated water, spreading across the grout, looking like what happens when you forget you’re pressing down with a fountain pen.

Mary-Ann Shoemaker had walked into the cafeteria carrying a plastic knife and an army backpack. She declared that she was a militant vegan and would slash us up if we even thought about eating our tacos. Ten minutes later, she pulled two pepperoni sticks from her backpack’s front pocket. She ate them, her lips greasy and wet with non-alcoholic beer. Mr. Valleti tried to suspend her but since she wasn’t really drinking, he couldn’t.

“Well,” Kit said, picking bits of dandruff off her scalp and dropping them onto the floor, “She did get drunk. At Sadie Hawkins. Remember?”

We remembered. Mary-Ann Shoemaker had holed herself up in the custodian’s closet with seven miniature bottles of rum. When she emerged, she wobbled her way to the dance floor. She threw up on Mr. Valleti’s shoes, her vomit pink and smelling like dead things. Mr. Valleti yelled at her in the courtyard. We peeked through the crack in the gymnasium door, arguing about whether or not Mary-Ann Shoemaker was crying.

Cassie slapped her strawberry-skin legs. “Oh, God, yes! Remember when Jacob tried to kiss her after the football game? Gross. Like, beyond gross.”

Jacob smelled like Pizza Pockets and jerk-off tissues. He declared his love for Mary-Ann Shoemaker after our school lost the football game. She told him to follow her under the bleachers, and he did, mosquitos buzzing around his head. Jacob leaned towards her and when their mouths touched, she bit his tongue so hard it bled. She sauntered away, spitting onto the just-watered grass and laughing like the Disney hyenas.

Rosalie nodded like a dashboard bobblehead. “My dad is a prison psychologist,” she said, “And he says Mary-Ann Shoemaker is mentally disturbed. She hits herself. She breaks glass and cuts herself with it. Remember when she slammed her head against the mural?”

We all remembered. Mary-Ann Shoemaker whacked her face against the atrium sculpture of St. Jerome until her face looked ready to split. She kept slamming, holding her breath like she was underwater, until Mr. Valleti pulled her into his office. She cried, talking about her dad and her blood. We could hear her from the atrium. We could hear her all day long, even after we went home, even as we ate dinner, even as we watched that night’s Teen Wolf.

“Bizarre,” Kayla said. “She cleaned out her locker this morning and it looked like a freakin’ war-zone. Did you guys see?”

We had. Mary-Ann Shoemaker pulled out hot-glue popsicle sticks, cigarette cartons, dirty menstrual pads, non-alcoholic beer cans, and alcoholic beer cans. She shoved her artefacts into a black garbage bag and left it on the senior table.

Tawanna tapped her manicured finger against the window, jumping in her seat. “Wait, look! There she is. On the smoking hill. See?”

We all rushed to the window, our teacher not minding, and looked.

There we were, too, peering down from the third floor, our eyes forever-shocked, saying everything about her to each other, never saying anything at all to her.

Sarah Priscus has published short fiction and poetry in a number of journals, including Barren Magazine and Rookie Mag. She has received a 2019 Best of the Net nomination for a story published in Atlas and Alice. She writes in Ottawa, Ontario, where she attends the University of Ottawa for English and Theatre. Priscus can be found on Twitter at @sarahpriscus.